A few years back, in between finishing the first three years of my undergrad and starting an Honours year, I took myself on a solo road trip around outback New South Whales. I ended up in Broken Hill. What a strange and wonderful place.

I was there a whole week all up. I spent a couple of days at a caravan park with my tent, then I went out to Silverton and ended up staying there for a night in the beautiful quiet little caravan park. I remember I had some pita bread and a tomato, and that was about it. There were no shops around. A middle-aged couple took pity on me and offered me some of their sausages (this was before I stopped eating meat). They were bemused to find a young white Australian woman driving around on her own. I wasn’t surprised, but still it gave me pause for thought, to ask why do so few young Australian people travel around this great big country and instead jetset off to Europe or South-East Asia or South America? Is it the ongoing cultural cringe factor, the persistence of this idea that there is nothing really to ‘see’ in Australia? Or is it that the country is so spread out, there’s not enough people to build up trendy spots in the more remote locales? Or is it just that to be a backpacker in a foreign country has a certain exotic allure to it, the mystique of the traveller, while to be a backpacker in your own country you just look like a bum?

I digress. I visited Broken Hill in November, at the height of a drought. The countryside for miles around was bone dry. It certainly shook a lot of my romantic notions about the outback. Even the kangaroos looked starved. I’d grown up with this belief that Australian animals were instinctively smart, they knew where to find water when us stupid white humans were lost. You can thank Dot and the Kangaroo for that I guess. And no doubt they can. But it also made me realise that in a drought as savage as this one, the animals suffer too—or perhaps they suffer more. I can’t say whether this drought was worse because of climate change or because the clearing of the land for mining had disturbed all the delicate balances. All I knew was that it was a hot, dry, hard place, and I was astounded at the sheer arrogance and foolhardiness, it seemed to me, of the white settlers who first thought they could make a life here. There was no water.

Even so, I saw amazing things. In Silverton I counted the tracks of seven different creatures in the bottom of a dry sandy creek bed one morning. I couldn’t identify them all but there were several different birds, a centipede perhaps, and a goanna. A veritable highway of activity all night. In that same creek bed there was a eucalypt (a Red Gum, I think, given its vicinity to the creek) that must have been struck by lightning a long long time ago. The trunk had been completely severed in two and now the two parts grew separately half a metre a part. They looked so different—one robust and fresh-looking, the other as though it was on the way out—that I wasn’t sure if they were the same tree. But their trunks mirrored each other like puzzle pieces or Yin and Yang; if you pushed them back together they would just fit. I wondered if they still shared the same roots; perhaps they did and the healthier half was stealing all the nutrients from the weaker half, that’s why it was dying. But could the fit half survive if the other died? I wished I was an ecologist at that point, or at least had someone around who could tell me. Another place I saw a tree that seemed to have grown over a rock like honey drizzled over a spoon; slowly engulfing it like a liquid. How many years? I wondered. 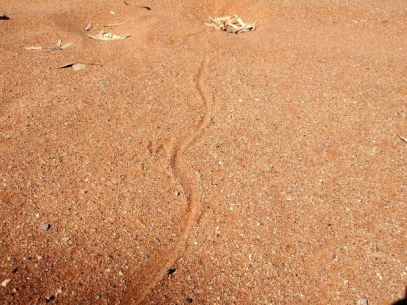 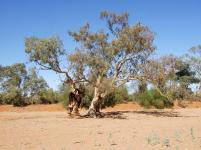 The two trees that I think were once one, struck by lightning long ago.

The tree had spread over the rock like honey. Mutuwinji National Park.

One day I drove out to Mutuwinji National Park, a couple of hours’ drive north of Broken Hill on dirt roads, with a German girl and a Swedish guy who I met at the hostel. It was a hot day, and the flies were sticky. We set off on a loop walk off about eight kilometres. The first part took us into a valley which narrowed gradually down into a closed chasm. At the very end there was a stagnant black puddle of water, and drinking from it was a very skinny emu, its feathers hanging down limp and patchy. The Swedish guy sprang into action with his camera at the sight of it, and despite my protests to let the poor thing be, he tried to get closer for a better shot. The emu panicked and took off. Because we were blocking the emu’s exit back through the centre of the valley, it took off up the side. It was steep and thick with vegetation and the emu looked clumsy as it pushed through on its long legs. Then there was an awful moment when the emu tripped and fell down. It started to roll and disappeared from view for a moment behind a spinifex, then came tumbling out the other side. It flailed on its side for a moment in the scrub, like a beetle stuck on its back, legs frantically paddling at the air. There was something so heartbreakingly sad about it. I felt like I was watching a creature that was down to its very last resources, and now had lost its dignity. I felt sad for the creature. But more than that, I felt pity; pity for this majestic bird reduced ignominiously to something that could have been a scene from a cartoon. I had never seen a wild animal trip before. I had always assumed that they were perfect in their ‘naturalness’; perfectly evolved to thrive in their environment. But this encounter reminded me that they are fragile after all, that their grace cannot survive any onslaught and that, when stressed, they will slip up like the rest of us. Most of all, I just felt shame; shame that we had intruded so rudely on its quiet suffering, and added to its despair.